Coca-Cola and the Carolina Panthers

On our latest project with Coca Cola Consolidated, we headed to the Bank of America Stadium, home of the Carolina Panthers. Nowsay was hired to conceptualize and produce multiple videos to spread the word of their new partnership with the Carolina Panthers. For over 10 years Pepsi has been the main beverage vendor inside Bank of America Stadium; therefore, this new partnership announcement was extremely important to our clients at Coca Cola Consolidated.

This fast paced project commanded two different goals. First, we were asked to film and create a “behind the scenes” video of a photo shoot that took place with Defensive Tackle, Kawaan Short, and Coach, Ron Rivera. These were to be used for multiple marketing purposes. The second task was to create a 30 second teaser to be shared on all social platforms for the Panthers & Coca Cola Consolidated. The concept included the Coca-Cola Polar Bear and the Carolina Panthers, Sir Purr, in a suspenseful yet comical passing of the ‘torch’. With four different film locations and limited access to certain parts of the stadium, this was not an easy task. Our team had to work swiftly, and most importantly, effectively.

The spot called for two different aerial shots (tight & wide) with a Coca-Cola delivery truck that we had reserved for two hours. These particular shots took planning and coordination to make sure our drone system, the DJI Inspire 2, was in the correct place. We wanted to capture the Coca Cola truck as it drove past Bank Of America stadium, on highway 277. We nailed these shots quickly and were able to move on ahead of schedule.

After capturing the delivery truck, it was time to get into the Panthers locker room for our next shot. If you haven’t been in a NFL locker room before, they are massive in size. We were able to light our subject with Arri Skypanels at one end, while making sure not to intrude on Coach’s photoshoot happening down at the other end. Working with public figures can be a little nerve racking for some. Our goal is to treat them just like any other client – with warmth, respect, and friendliness. This good rapport benefits everyone involved, ultimately resulting in a greater final product.

Since we were moving quickly from location to location, we made the decision to run our RED Helium 8k on the EasyRig support system for most of the day. This system allowed our camera operator to move quickly and freely while achieving a multitude of different shots. We also ran our wireless video monitoring system so our director, Zach, and clients from Coca Cola, always had eyes on the action as takes were being captured. This ensured everyone was pleased. 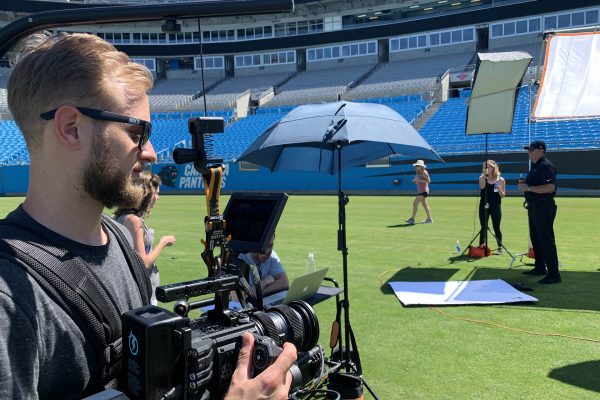 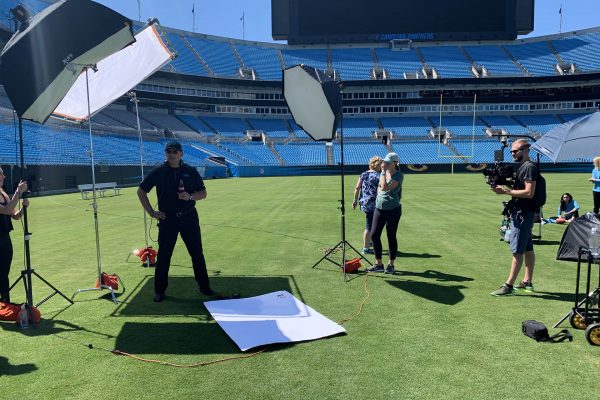 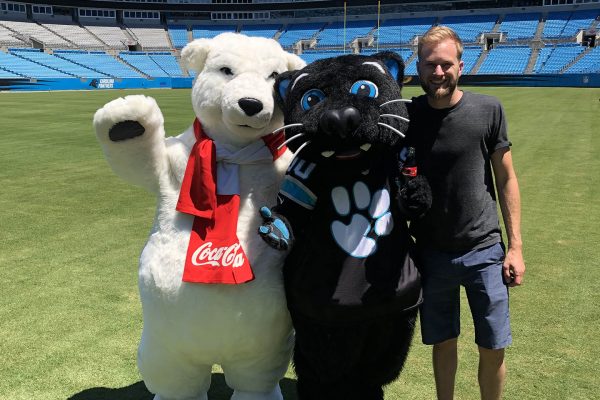 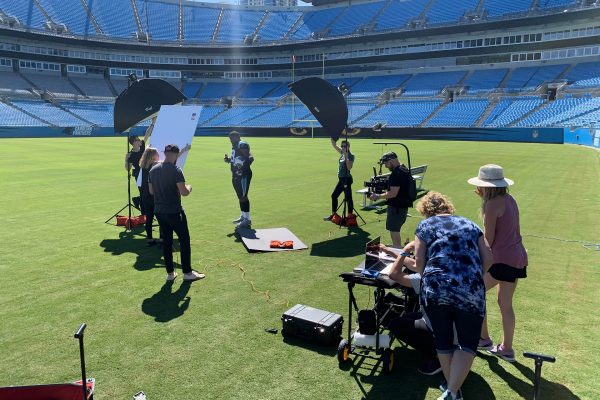 Oh, and one thing we haven’t mentioned.. We learned about the project less than one week from the official shoot day! The ball needed to start rolling and rolling fast. From learning about the shoot the week of, pulling all the moving pieces together, and then turning around the edits as fast as possible for the announcement deadline, we are proud to say that we pulled it off – start to finish in less than two weeks!

Congratulations to Coca Cola and their new partnership with the Carolina Panthers. Cheers!